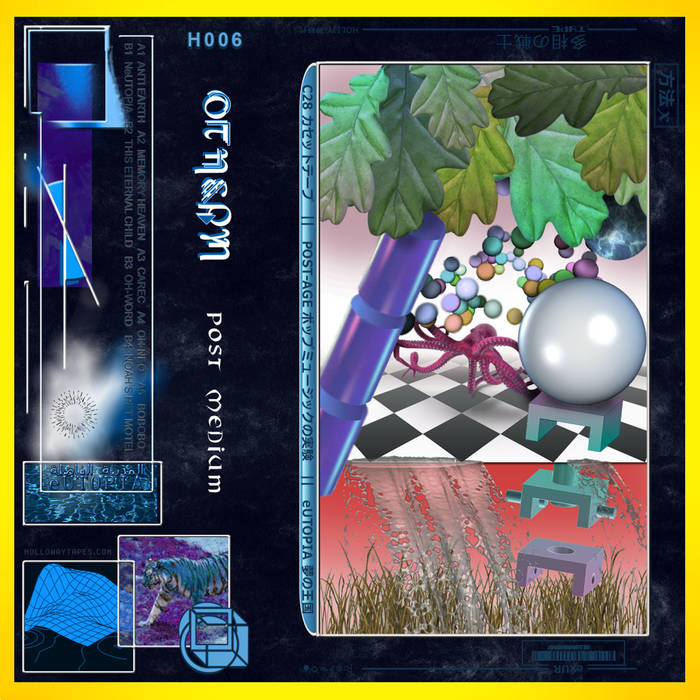 wc_helmets One of the most gorgeous electronic pop albums I've heard this year. Great arrangements and production. Not to be slept on. Favorite track: BOBOBO.

No Name No Slogan

"Sacred pearls of ambient electronica shine across an inter-dimensional cathedral of light, as a disembodied voice blurs the line between digital and spiritual. Driving beats and flowering blossoms of mathematical wonder swirl and flourish on the peripheral planes of perception. This is Post Medium - a new journey into ancient worlds beyond our own. Upon arrival in this unknown existence, we are greeted with messages of otherness, of being and non-being.

Post Medium exists in a place all its own, pulling together elements from pop, ambient electronica, darkwave, and vaporwave to create a unique sonic experience. Clear, otherworldy vocals ring out above the polished synth backdrops for strikingly dramatic aural expressions. Otherm balances textured passages of electronic art with powerful, lighter-than-air melodies and vocalizations in a cohesive work that will brighten any collection." - Gray Lee

ANTI-EARTH written in 2015. Lyrical inspiration generated via OTHERM personal Facebook status' circa 2008 through 2013. Recorded in 2019 at Small Sea Studios.

BOBOBO written in 2012. Lyrics written at Corner Bedroom Offices in 2012. Recorded in 2019 at Small Sea Studios.

Track Name: CAREC
Near sunny red rocks
Tam copped a ten spot and
Headed down the endless highway
With smoke pouring from
The window and gun
Strapped to her side
Tam proceeded to drive
All along up the coast
Still haunted by ghosts
Tam pushed the pedal
Hard to the floor

No, her mind was not there
As she thought of "his" hair
And drove straight off the
Edge of a treacherous cliff
But Tam's bearing a grin
As her car crashes in
To the side of the rocks
Now Tam and the Man
Are no more
Track Name: BOBOBO
Call the wayward
Call them
Grace them

Call them up
Take them right
Insightful obvious

So call them up
Take them right
Strive to be everything
The end, of the Dark
Track Name: THIS ETERNAL CHILD
I live in the past
We all wish we could go back
Yes, we wish to go back
But, life never stops
Moving forward
Track Name: NOAH'S PET MOTEL
Pink curtain breeze, down by my knees
Bees
Buzz certainly, don't be surprised
The wall it bleeds, like sap from trees
Slow
And at the freeze, don't cry too much

\\\ Oh domino, oh domino
Why
Oh domino, there's no need to cry
Be ever so, majestical
Sweet
Be ever so tight on the small fleet ///

Do you think they will like me? I don't want to be lonely

Just try and breathe, elect with ease
Truth
Set them all free, exist for proof
Which way is down? Try not to drown
Sight
Perspective is of what you make

Do you think they will like me? I don't want to be lonely

Garden of thee, how can it be
So
Flowers like these need summery vibes
But in the sound of birds around
And
The sun beating down while their breath's
Were heavy in the heat of day
The little dog knew she was
Going to be okay

\\\ So hard to know, so hard to show
Why
I'm not ready to say my goodbye
Don't sell me, no, it's not for show
Friend
Oh little sky, just show me the end
Don't rattle me; no time to pretend
Your hand, how sweet of you to extend ///